By Infinite Fate - October 02, 2012
I'm currently "semi-addicted" to several games in Steam including Civilization V, Hero Academy (also available in iPad), Dota 2 (big noob in this game), and Might and Magic Heroes VI. PC games sure have gone a long way from the time I started playing around the early '90s.

It was my kuya Ron who introduced me to computer gaming (actually, to computers, in general). The first PC game that I remember playing is Scorched Earth.

In this game, you control a tank and try to blow up your opponents using a variety of weapons (similar to Worms). Your arsenal includes MIRV (Multiple Independently Targetable Re-entry Vehicle) missles, Napalm Bomb, and the famous Nuke. You can also use defensive and support items like shields and parachutes.

In school, one of the few available games is Adventures in Math run using GW-BASIC. The player is set inside a castle and his goal is to find the exit. To open doors and pick up treasures, the player has to answer math problems from simple addition/subtraction, to complex multiplication/division questions.

Here's a screenshot of the game "in action": 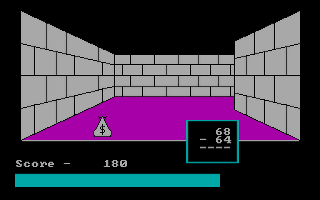 Aside from Adventures in Math, one of the most educational game that I enjoyed back then was Where in the World is Carmen San Diego?. It introduced me to a lot of difficult English words and different places around the world. I remember playing this game with a big Webster dictionary and concise encyclopedia beside me. BTW, I still play this game once in a while using DOSBox, and there are still A LOT of things that I still don't know! Good thing it's a lot easier now to search for those pesky landmarks! =)

All images in this blog, unless specifically identified, were searched using Google, and are the property of their respective owners.
PC Games