Showing posts from October, 2012
Show all

By Infinite Fate - October 04, 2012
Section 19 I agree that laws are just tools and can be used either for good or evil. Appropriate tools, however, should be given to responsible people at the correct time. You would give crayons to toddlers to let them express their creativity. You wouldn’t give a gun to teenagers to settle arguments. For me, our government is not mature and responsible enough to be provided with the encompassing powers provided by section 19 (takedown clause). Cyber Libel Libel before the Information Age is a serious offense worthy of being treated as a crime. Due to the “one-way” nature of the traditional mass media (radio, television), paninirang-puri places the victim in a very disadvantageous position since he has limited power to let other people know his side of the story. This poses serious threats to his reputation and character. With the advent of the Internet, and with laws requiring traditional media to print or air the responses of the “aggrieved” party, everyone has been granted the
Post a Comment
Read more

I'm currently "semi-addicted" to several games in  Steam  including Civilization V, Hero Academy (also available in iPad), Dota 2 (big noob in this game), and Might and Magic Heroes VI. PC games sure have gone a long way from the time I started playing around the early '90s.  It was my kuya Ron who introduced me to computer gaming (actually, to computers, in general). The first PC game that I remember playing is Scorched Earth. Scorched Earth screenshot In this game, you control a tank and try to blow up your opponents using a variety of weapons (similar to Worms). Your arsenal includes MIRV (Multiple Independently Targetable Re-entry Vehicle) missles, Napalm Bomb, and the famous Nuke. You can also use defensive and support items like shields and parachutes. MIRV attack! In school, one of the few available games is Adventures in Math run using GW-BASIC. The player is set inside a castle and his goal is to find the exit. To open doors and pick up treasu
Post a Comment
Read more 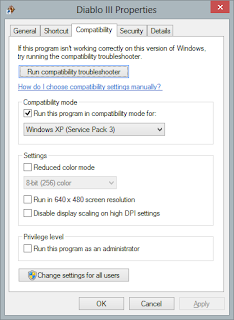 As much as I  hate  don't like Microsoft, I have to admit that, so far, I like the performance of Windows 8. I have been using the new OS for almost three weeks now and it was able to run all my programs with minimal issues and impressive performance. The only "major" problem that I had was installing and running Diablo 3. I was able to fix it by running the installer and the game in Windows XP compatibility mode: Diablo 3 Compatibility Settings Here are some screenshots of the game: Game Launcher (with some portion of our pre-nup pictures in the background!) My Level 52 Demon Hunter The "dual personality" issue is, surprisingly, really not a biggie. I was able to use my laptop comfortably without dwelling too much in Metro/Modern UI. All it takes is one additional click to launch the Desktop UI and I'm back to my familiar and much-loved interface. Even the lack of the Start button and Start Menu was also not a major issue for me. Once I fou
1 comment
Read more
More posts